Olive oil is derived from the fruit of olive trees. There are many types of olive oils, each with unique flavors and qualities. Virgin olive oil, for example, refers to olive oil that has not been synthetically treated. Common uses of olive oil include the base for salad dressings and dips for breads. Olive oil, which is often touted as a health food, contains many vitamins and minerals, including vitamin E. 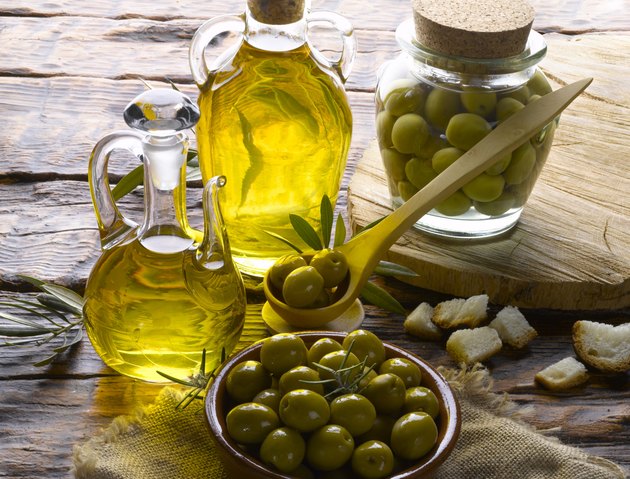 The type of vitamin E found in olive oil is alpha tocopherol. One tablespoon of olive oil contains 1.9 milligrams of vitamin E, which is 10 percent of the daily value of this nutrient based on a 2,000-calorie diet. The recommended dietary allowance of vitamin E — for both men and women 14 years old and older — is 15 milligrams per day. In addition to olive oil, other oils that contain vitamin E include wheat germ oil, sunflower oil, safflower oil and corn oil.

Vitamin E is an antioxidant that limits the production of free radicals in the body and helps to prevent some chronic diseases. For example, free radicals may contribute to the development of cancer and cardiovascular disease. A study involving 90,000 nurses found that there was a 30 to 40 percent reduction in the incidence of heart disease in people with high vitamin E intakes, especially from supplements. In addition to its antioxidant functions, vitamin E also plays a role in cell signaling, regulating gene expression and immune function.

Other Nutrition Facts in Olive Oil

While olive oil contains vitamin E and other beneficial nutrients, it is important not to overdo it, as oil is a calorie dense food. For example, 1 tablespoon of oil contains about the same number of calories found in two apples. The U.S. Department of Agriculture notes that many Americans consume enough oils via foods such as nuts, fish, cooking oil and salad dressing. The daily recommended intake of oil varies and is based on age, sex and physical activity. As a general guideline, adult women should not consume more than 5 to 6 teaspoons of oil per day, and men should limit their intake to 6 to 7 teaspoons.