We all know that the newly-purchased oil press needs time to run-in during the early period. Old-fashioned machine needs a long time to adapt, So many manufacturers have launched the oil press machine which can be used to extract edible oil directly without running in. However, what you don’t know is that the running-in of oil press machine is definitely different from the process of oil extraction. And simple machine test can do a lot to quickly put the machine into use. 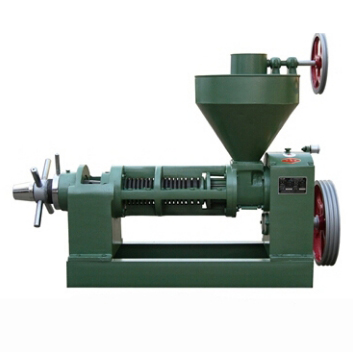 Before using the oil expellers, prepare assistive devices and container tape, check and adjust the tightness. And then start the motor for 15 minutes without feeding, check the rotate speed of screw shaft. The general speed should be about 33dmin. Pay attention to the voice between gears, the bearing parts and motor. Also, the motor current should be under control when idling. In addition, stop the machine immediately if the current is too strong, and then restart after adjustment.

Master the billet temperature according to different oil plants. Feed the oil plants and water into the pressing plate. Press the tiniest position especially, relax stem nut, unplug the active pin, and the rotating bar is just on the side. Turn the rotating bar back to the starting position and tighten the piston at the same time. Press gently to deal with stress from the regular extrusion, too much force would lead to an accident. For the oil plants of high oil content, press with the low-pressure pump for the first time, and replace with a high-pressure pump for the second. If the pressure gauge point can’t return back to zero, it’s necessary to test, repair and replace. Open the return valve, the oil would flow back into the tank automatically, and then it’s OK to remove the extrusion plate.

After the above test, prepare about 50kg (such as soybean, rapeseed) raw material for the hopper. Note: feed slowly at the beginning, or else the pressure in the chamber would increase, which would lead to serious accidents. Thus at the beginning of pressing, feed slowly and evenly, and repeat the above process for more than 3 ~ 4 hours, the temperature of the screw oil press would increase, or even smoke(this is normal ). At first, the temperature of the chamber might be low, twist and adjust the handle on the stud to increase the thickness of the cake and improve the moisture of the oil plants at the same time. When the chamber temperature rises to about 90° C, or say the oil press could operate normally, adjust the cake thickness to about 1.5 ~ 2.5mm, and tighten the fixed nut.

After normal operation, the raw material of high oil content is mostly concentrated in the bar came and the front exhausting. 60% of the oil comes from the bar came, and 30% from the front exhausting. While the discharged oil from the end is clear with little quantity. During this period, blend oil cakes of much oil into the raw material for twice pressing. Also, feed in a uniform and steady way, otherwise it will affect oil yield and the life of the hydraulic oil press.

During the operation, check the condition regularly and control the oil plant moisture. Normally the oil cake is flaky, it feels smooth on one side while there are many pores on the other. If the cakes are loose or shapeless which could be pinched into pieces by hand, that shows the low moisture of the raw material. If the cakes are feeble, and most of them are flaky, that indicates high moisture. Under normal conditions, there is little or no residue from round rings. In addition, the oil outlet position would move according to the moisture of raw material.