Tea seed oil production line adopts low-temperature screw pressing technology to extract oil from raw tea seeds. The oil extraction production line is compact in design, has a small footprint, and it is easy to operate and easy to maintain. It is widely used in small and medium oil production plants.

The comprehensive production process of tea seed oil is as follows:

If the water content of the harvested tea seed is too high, the husk is hard to be broken and the plasticity is large. The squeezing is easy to excrete. Therefore, Camellia seeds with high water content should be dried so that the moisture content does not exceed 5% in order to dehull and roll the embryos. Tea seed drying is very important in oil extraction, and the quality of tea seed drying has a direct effect on the oil yield.

1.1 Changes of heat and steam pressure in drying tea seed

The purpose of cleaning is to increase the oil production rate, to improve the quality of tea seed oil and the utilization value of oil cake, to improve the treatment ability of the machine, to reduce the wear degree of the equipment, and to increase the processing capacity of the equipment. Cleaning methods include screening, destoner machine, magnetic separation, removal of side-by-side mud, dry specific gravity sorting and other methods.

The camellia seeds after drying should be cleaned of empty shells, dirt, and other debris. And the process requirements for seed cleaning are as follows: The maximum impurity content of the clean oil tea seed is less than 0.2%; the amount of tea seed in the waste is less than 0.5%.

The impact mill is used to break the seed husk, and the husk is thin, and after drying, it contains few moistures and is easily broken. The requirements of shelling and kernel shell separation are: high shell breaking rate, no seed leakage, small powder degree; and there are two main indicators for the separation of kernel shells, that is, shell percentage in kernel and kernel percentage in the shell. Obviously, the lower the kernel percentage in the shell, the better the oil output rate, which is beneficial to the full utilization of raw materials and the increase of oil yield and cake yield.
The kernel percentage in the shell can be set to 0.3%. The shell percentage in the kernel is hoped to be as low as possible, but there are two points to consider: one is that, with a low shell content, the squeezing chamber of the oil press is easily locked by the pressed material, causing slippery buckling. The squeezing is difficult to carry out. The second is to consider the solvent leaching of the cake. When the cake contains fewer shells, there is no skeleton, the material layer is easily compacted, and the solvent penetrates difficultly, resulting in high residual oil in the oil cake, affecting leaching efficiency and solvent consumption. Based on the above two points, after repeated testing, we found that the best value for shelling is to separate about 75% of the tea seed shell content.

A toothed roll crusher is used to crush the kernels containing a certain amount of shells. The purpose is to granulate and homogenize the seeds of different sizes so that they have the largest surface area and are conducive to the water conditioning. However, the degree of powder cannot be too large, so the spacing between the two-toothed rollers should be strictly controlled.

After the addition of water, the entire structure of the tea seed kernel has changed greatly, which facilitates the extrusion of the oil. Considering the plasticity and elasticity of the squeezed material, the water content is generally controlled at about 2%. 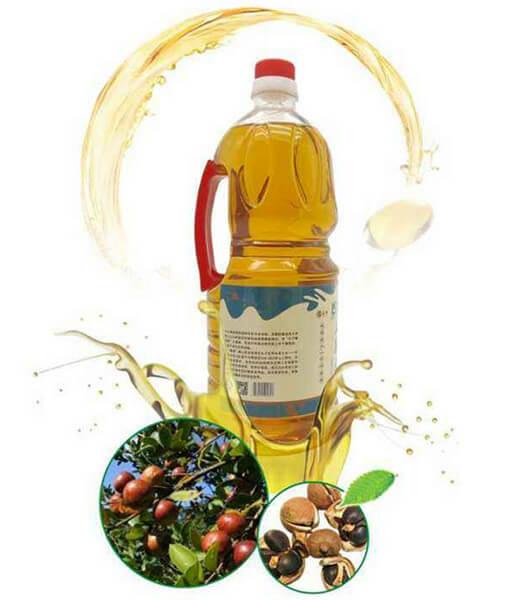