Skip to content
HomeOther NewsWhat Are the Dangers of Heating Cooking Oil?

The consequences of heating cooking oils extend far beyond the immediate risk of burns by splattering hot oil. Research has demonstrated that all oils can withstand varying levels of heat. If that level is exceeded, however, the oil not only begins to lose its nutritional value and flavor, it produces toxic fumes and hazardous substances called free radicals. Avoid such risks by choosing an oil suitable for your cooking method. 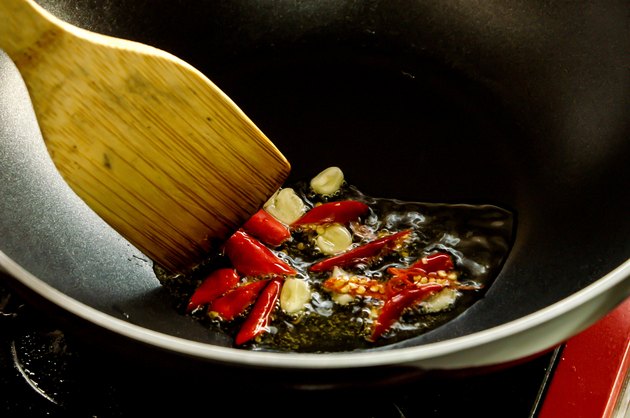 The threshold of heat tolerance is different for every oil, and when it comes to cooking, not all oils are equally desirable or safe. A heated cooking oil is considered unsafe when it reaches its smoking point — the temperature at which it begins to chemically break down and smoke continuously. At this point, the fat molecules break down into glycerol and free-fatty acids, and the glycerol breaks down further to produce toxic fumes and free radicals — not to mention an unpleasant flavor.

The Right Oil for the Job

The Cleveland Clinic classifies oils in smoke-point categories, such as high, medium-high, medium and no-heat. For example, extra virgin olive oil falls into the medium-high category, and coconut oil falls into the medium category. The no-heat oils, as their name implies, should not be subjected to heat and instead used for dips and dressings. These include flaxseed and wheat germ oils. For deep frying, the USDA recommends that you use oils with the highest smoke points. These include peanut, safflower, soybean, grapeseed, canola, corn, virgin olive, sesame and sunflower. These oils have smoke points ranging from 410 to 450 degrees Fahrenheit.

Research on the effects of heating oils has been geared toward understanding safe practices for deep-frying and industrial purposes. In a study published in 2010 by the “Food Chemistry” journal, researchers studied the emissions from four commonly used oils — safflower, canola, extra virgin olive and coconut. Each was heated to four temperature levels, and its emissions were analyzed for certain toxic fumes, including aldehydes, which are known to be cancer-causing. When an oil exceeded its smoke point, the amount of toxic fumes increased significantly, according to the study. Canola oil, with the highest smoke point, gave off the lowest levels of toxic fumes. Coconut oil, which has the lowest smoke point of the four studied, emitted the greatest amount of total volatile fumes at all but the lowest temperature.

Chemical byproducts in the toxic fumes generate free radicals, which are damaged cells. Once inhaled, they have the potential to damage other healthy cells in your body by changing their DNA. Over time, these damaged cells accumulate and can become precursors to various diseases such as cancer. Health professionals encourage limiting exposure to external free radical sources, such as air pollution, cigarette smoke and fumes from overheated cooking oil — and consuming a diet rich in antioxidants, which is a natural defense against them.

Even credible sources differ on the subject of exact smoke points of some oils. A particular brand may claim that its oil has a high smoke point, but research may not necessarily support that claim. A general consensus from food science and nutrition experts is that the more refined an oil and the lighter its color, the better its heat tolerance. Fortunately, most commonly used oils can stand up to moderately high heat. Experts recommend throwing out oil if it has begun smoking, and not reheating used oil.