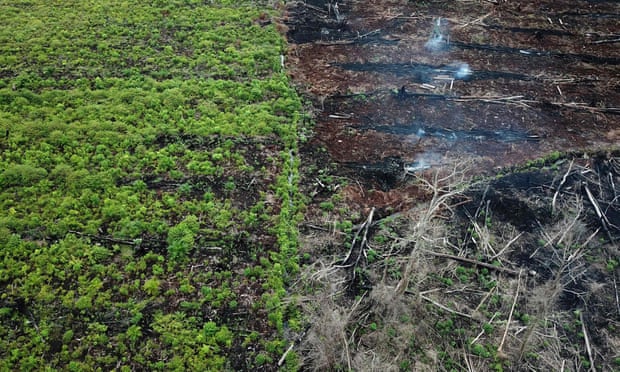 The UK is defying EU institutions to push for a hike in nominally “sustainable” Indonesian palm oil imports which have nonetheless been linked to deforestation, leaked documents show.

The European parliament is currently trying to force a ban on EU biofuels using palm oil, which have driven deforestation and contributed to the loss of 150,000 orangutans in Indonesia since 2002.

A binding “due diligence” regulation for high-risk forest products would be the “most effective” way of curbing this forest destruction, according to a draft EU study due to be released later this month.

But a leaked British diplomatic paper seen by the Guardian calls for a planned EU-Indonesia trade deal known as CEPA to “boost” palm oil production.

It advocates an “ambitious chapter” on sustainable trade, covering “primarily the production of palm oil”, arguing that global demand for sustainable palm would allow a doubling of the current supply.

“To avoid burdensome discussions about the different certification schemes that exist, we should focus discussions between the EU and Indonesia on our common goals and perspective,” the paper says.

The government did not immediately respond to requests for comment.

In practice, the UK’s new approach, which is supported by Denmark, France and the Netherlands, would increase Indonesian palm exports, according to Paul de Clerck of Friends of the Earth Europe.

“The British government is blatantly putting profits above people and the environment,” he said. “Indonesia wants full market access for palm oil that complies only with weak and ineffective certification schemes. Allowing this unsustainable palm into Europe will increase deforestation, conflicts with local communities and human rights violations. Palm oil should be taken out of the negotiations.”

The Green MEP Heidi Hautala called for CEPA to be made a “test case” for environmental chapters in EU trade deals. “The deforestation of Indonesia is likely to be increased with this free trade agreement unless there are safeguards,” she told the Guardian.

UK officials have previously described Indonesia’s sustainable palm oil standard as having “a credibility issue” due to its lack of transparency or adherence to best environmental practices.

Greenpeace researchers found the issue to be laced with post-Brexit trade intrigue, after Malaysia reportedly threatened to cancel defence contracts worth £5bn if the UK backed a palm oil ban in Brussels.

Britain’s high commissioner in Malaysia has described the ban as “unfair” and against international trade practices, while Malaysian ministers have suggested that Brexit could free the two countries from EU vested interests which had “a more protectionist approach in dealing with palm oil”.

Indonesia and Malaysia were among the 10 worst countries for dense tree cover loss last year, much of it due to their oil palm, pulp and paper industries.

After Europe imported around €6bn of palm, soy, beef and other agri-commodities from illegally deforested land in 2012, the European commission began an outline study to pave the way for a deforestation action plan.

The report, which the Guardian has seen, considers various approaches but concludes that “legislative action may deliver the most on effectiveness”, albeit at a higher cost.

The due diligence regulation it suggests would involve mandatory disclosure of information on deforestation-proofing of financial investments, and lower import duties for approved commodities.

Nicole Polsterer, a campaigner with the Forest and EU resource network (Fern) said that the conflicting signals from the UK and EU “show policy incoherence of the highest degree and underline the urgency for EU action on deforestation. Regulatory measures are the best way to tackle deforestation.”

Greenpeace forest campaigner, Daniela Montalto, said: “If the UK government wants to be an environmental leader, it should clearly state that there’ll be no place in Britain for palm oil that’s tainted with deforestation. Michael Gove has an opportunity to show he’s serious about not allowing post-Brexit trade deals to lower our environmental standards – he should seize it.”