Olive oil is a staple ingredient in some recipes, but its varied and miscellaneous uses do not just end here. It has very many medicinal as well as health-related benefits as well. The oil is enriched with monounsaturated fatty acids and therefore, cause a decline in bad cholesterol level. It is also quite helpful in the prevention and cure of breast and colon cancer, cardiovascular issues, diabetes, high cholesterol, and arthritis. It also improves metabolic rate, digestion, prevents weight gain, and is anti-aging.

Extra virgin olive oil is abundant with oleic acid and antioxidant polyphenols which makes it a way healthier option than its normal vegetable oil counterpart. However, caloric count in extra virgin olive calls for its use in a moderate amount, which is about about2 tablespoons a day as recommended by Food and Drug Administration.

What is Olive Oil?

Mainly found in the Mediterranean regions, olive oil comes from the fruit of olive that sprouts on an olive tree. The many uses of olive oil by mankind include using it for cooking, in the production of bath soaps and cosmetics, and for pharmaceutical and medicinal purposes. It was previously also used for lighting lamps and as fuel.

The main characteristics of Olive oil put it in four types which include:

Extra Virgin Olive Oil is a result of cold pressing the olive fruit which then releases the purest form of olive oil. This type of oil is called the extra virgin olive oil. It is highly beneficial for massaging and consumption as salad dressing without being cooked.

Virgin Olive Oil has a lower acid content, and you can use it safely for cooking.

Pure Olive Oil contains a high acidic content and is produced by combining virgin and refined oil. This type is used for cooking and culinary purposes the most.

Lampante Virgin Oil is never advised for cooking purposes and is the type that has undergone the highest level of processing. Its most common use is as fuel.

Olive oil by far has the highest nutritional value compared to all its counterparts. It is bursting with vitamin K, vitamin E, various antioxidants, and absolutely no carbs and cholesterol. Therefore, intake of olive oil reduces the chances of cardiac arrest and other cardiovascular diseases to minimal. The calorie count of olive oil is similar to canola oil and butter, but its nutritional value sets it apart and makes it a favorite choice for people who are health conscious. 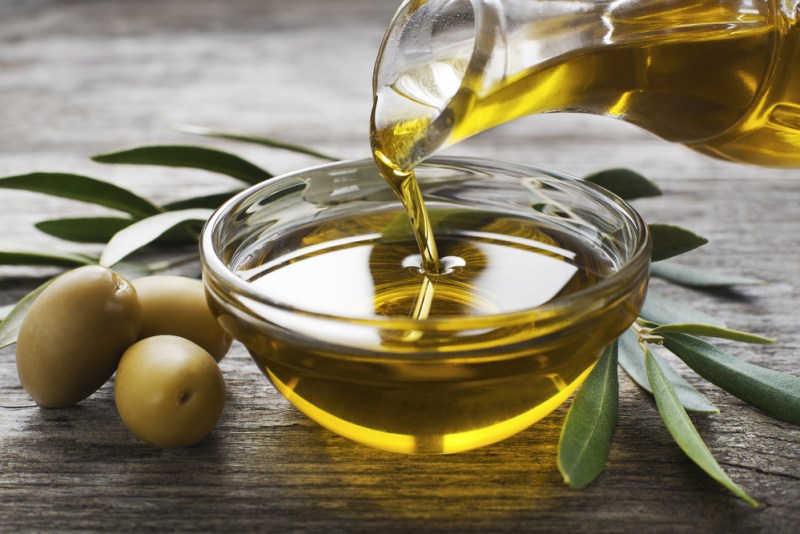 70% monounsaturated fats in olive oil are hugely responsible for lowering down the accumulation of cholesterol thereby preventing from various cardiovascular and related ailments.

Bad cholesterol, also known as LDL, is chiefly responsible for some cardiovascular problems. Extra virgin olive oil is enriched with over 40 antioxidants which combat the oxidation caused by LDL. Moreover, the beneficial characteristics of an extra virgin also help in increasing the level of HDL.

The level of monounsaturated fatty acids is so high in olive oil that it greatly prevents the body from getting overweight. Research has shown olive oils in moderation to be effective in maintenance of healthy body weight. Switching from unhealthy vegetable oil to olive oil might even cause a reduction in weight.

Olive oil has been found to be good for brain development and bone growth especially in children. It also improves metabolism to a great extent. It is very rich in vitamin E which is an ideal vitamin for people of older age. Olive oil is also very beneficial in easing the bowel movements and in cleaning the digestive tract, thereby making the process of defecation easier.

Resultantly, better metabolism and digestive system functioning as a result of using olive oil might also result in loss of extra weight.

Phenols are present in abundance in olive oil, and they are well known for their antimicrobial and anti-inflammatory properties. They relieve inflammation by inhibiting the production of pathogenic bacteria.

Widely used in bath soaps, cosmetics, and natural herbal therapy, the copious amounts of antioxidants present in olive oil slows down the aging process of the human body by keeping it healthier and younger looking for longer. When applied directly to the skin, it helps the skin shine and doesn’t leave the skin oily like most other natural products, such as heavy cream milk does. The massage of extra virgin olive oil has also been found to be highly efficacious in relieving pains and stress-related fatigue.

Olive oil has proved to be very effective in preventing the formation of gallstones in the gallbladder.

A nutrient called polyphenols present in olive oil is found to be chiefly responsible for fortifying the cell walls. It is further very effective in strengthening the arterial walls thereby preventing cardiac arrest and other pulmonary artery and related diseases.

An Oxford University research has shown that acidic content present in olive oil is highly beneficial in protecting the body from bowel and rectum cancer. Responsible for over 20,000 deaths per annum, bowel cancer is the highest life-threatening type of cancer in the United Kingdom. Olive oil is a wondrous oil to protect from the commencement and progress of this type of cancer. Therefore, it must be consumed daily in moderate amounts.

10. Prevention and Cure of Breast Cancer

The cancer type that is responsible for the highest mortality rate in females all over the world is breast cancer. A compound called hydroxytyrosol present in olive has been found to be useful in the prevention and cure of breast cancer in postmenopausal women.

A strictly Mediterranean diet comprising of olive oil (abundant in unsaturated fats), and nitrate and nitrite (leafy green vegetables) can greatly benefit in lowering hypertension. The conclusion above has been drawn from the latest study and holds a lot of circumstantial evidence.

You can use olive oil for various purposes depending on its aroma, flavor, color and acidic value. Consuming olive oil can not only keep you healthy but it is also highly advantageous in protecting you from some diseases that might otherwise a regular diet consisting of ordinary vegetable oil cannot, or worse, might even put you at risk for (by blocking the arteries and proper blood flow).

It must be made an important part of one’s diet if being healthy and living an active life is the goal.