If you’re in the biodiesel industry or are considering entering the industry, you may have heard of the Renewable Fuel Standard . It is important to understand this federal program since most biodiesel producers are required to participate in it, except for small or new biodiesel producers.

What is the Renewable Fuel Standard?

The first Renewable Fuel Standard applied mainly to gasoline and ethanol. The second Renewable Fuel Standard mandates the inclusion of other biofuels such as biodiesel into the country’s petroleum fuel supply. RFS2 also mandates that biofuels used under the program cause less greenhouse gas emissions to enter the atmosphere compared to the petroleum fuels they replaced.

Biodiesel producers and importers are required to participate in this program, as long as the fuel they make qualifies.

Under RFS2, biodiesel can qualify as a renewable fuel, as biomass-based diesel, and as an advanced biofuel. Below are the EPA definitions.

If biodiesel does not meet one of the above definitions, it cannot generate RINs (Renewable Identification Numbers) under the RFS2 program. However, it could still be sold on the market without RINs.

Also, if you make biodiesel from a feedstock that has not yet been approved by the EPA to participate in the RFS2 program, you can still sell this biodiesel, but you would not be able to generate and sell RINs. The exception is plants that started construction before December 19, 2007 (in other words, before the enactment of EISA). These “grandfathered” plants can sell biodiesel and generate RINs under the “renewable fuels” category even if the feedstock has not yet been approved, as long as the feedstock qualifies as “renewable biomass.” See the Greenhouse Gas Reduction section below for more information.

The chart below illustrates the various biofuels which qualify under RFS2. As explained above, biodiesel fits into several categories: biomass-based diesel, advanced biofuels, and renewable fuels. 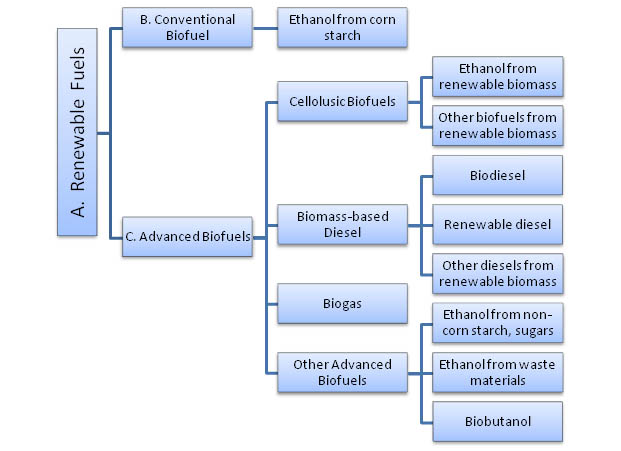 In order to protect forests and other ecologically sensitive land, biomass taken from the following types of land is NOT included in the EPA’s definition of renewable biomass: 1. forestland; 2. rangeland; 3. other ecologically sensitive land. In addition, crops or residues from land cleared for farming after December 19, 2007 are not eligible as renewable biomass.

The EPA has done life cycle analyses for biodiesel from specific feedstocks, to determine if the fuel reduces greenhouse gas emissions by at least 50%, compared to petroleum diesel fuel.

Keep in mind that individual plants proposing to use these approved feedstocks still need to be evaluated by the EPA to determine whether their processes are compliant with the 50% greenhouse gas reduction.

The EPA is currently reviewing data on palm oil biodiesel to see if this can be approved.

Biodiesel that does not meet the 50% target but does meet a 20% greenhouse gas reduction could still be sold under the “renewable fuel” definition. Thus far, all the biodiesel feedstocks that have gone through the EPA process meet the 50% reduction, so this is not really an issue as of 2011.

Biodiesel that does not meet even a 20% GHG reduction, or biodiesel from feedstock that has not yet gone through the life cycle analysis modeling process, could be sold and generate RINs as “renewable fuel” under the “grandfather” provision, as explained in the RFS2 Q & A page:

“Biodiesel facilities may qualify for the exemption under 80.1403(c) from the requirement that renewable fuels achieve a minimum 20% GHG reduction as compared to baseline fuels if they ‘commenced construction’ prior to the date of enactment of EISA. . . . However, the fuel must meet all other requirements of the definitions in 80.1401, including the renewable biomass requirement.”

In other words, if the biodiesel plant commenced construction before December 19, 2007, and if this plant makes biodiesel from a feedstock that has not yet gone through the EPA’s approval process, this biodiesel could still be sold and generate RINs under the “renewable fuel” category. In this case the biodiesel would generate 1 RIN per gallon. There is no “grandfather” provision for advanced biofuels or biomass-based diesel.

A RIN is a 38-digit number that is assigned to each batch of biodiesel that is sold. Biodiesel with a RIN sells for more money than biodiesel without a RIN, because petroleum refiners must show that they have obtained a certain amount of RINs in order to prove that they incorporated biofuels into their fuel.

When biodiesel is exported, the RINs must be separated and retired. They cannot be sold.

Fuel sold as “advanced biofuel” or “biomass-based diesel” (biodiesel can fit into either category) carries 1.5 RINs per gallon. In other words, because biomass-based diesel is expected to achieve a greater greenhouse gas reduction than corn-based ethanol, it carries an “equivalence value” of 1.5 times that of ethanol.

Cellulosic biodiesel is expected to achieve a 60% reduction of greenhouse gases and carries a RIN value of 1.7.