Skip to content
HomeBiodieselIndirect Land Use Impacts of Biofuels

What is Indirect Land Use Change? 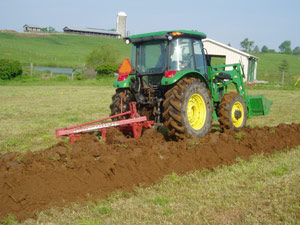 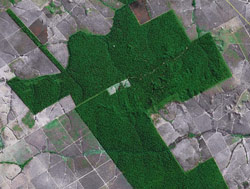 Indirect land use change (iLUC) is a widely debated concept that seeks to quantify the impact a new policy or commercial activity has on global patterns of existing land use. These impacts differ from direct land use changes because they are induced or caused by secondary factors such as price changes.

For example, current U.S. biofuel policy seeks to produce more renewable energy from agricultural feedstocks. The direct impact of this policy is that U.S. farmers will shift some of their existing acreage from production of food crops to an energy crop. However, because less food is now produced, food prices rise, which induces other farmers to convert non-crop lands (forests, conservation, marginal) to agricultural production. This conversion may occur in both the United States and abroad.

Non-crop lands, particularly forested land, store vast amounts of carbon in what is known as a carbon sink. When trees are removed and land is tilled and prepared for crop production, much of the carbon that has been sequestered is released. This increases the potential for global warming.

At issue is whether or not the current amount of land available for agricultural production can support the growing global population’s demand for both food and fuel. If it cannot, more land will be converted into production for crops.

The issue focuses on many developing countries because a combination of lax environmental regulations, rapid economic growth and a burgeoning population have historically led to environmental degradation. In places like Brazil and Indonesia, agriculture and biofuels represent a significant percentage of potential economic growth. But one of the few places left to expand crop production is in environmentally sensitive ecosystems such as tropical forests. According to rainforest conservationist rainforest conservationist Rhett A. Butler, U.S. biofuel policy motivated this deforestation which has lead to sizeable releases of carbon into the atmosphere when the trees are burned and land cleared.

Critics of iLUC argue that induced price changes lead to other behaviorial responses and technology adoption on the part of farmers, in addition to land conversion, which lessens the overall environmental impact of expanded biofuel production. Moreover, converted lands may originate in less environmentally sensitive regions. Finally, they argue that induced environmental impacts of existing oil exploration activites and fossil fuel development be considered for a balanced analysis.

Can We Find a Carbon-Neutral (or Carbon-Negative) Biofuel?

One potential answer to this problem lies in second generation biofuels, including those grown on degraded lands unsuitable for normal cultivation as well as waste biomass . There is also the possibility that biofuel crops can be grown on fertile land without interfering with current crop yields. Not enough research has been conducted in this area, and indirect land use impacts are unknown.

A nutrient-poor oxisol (left) can be made more fertile through biochar addition (right). Bruno Glaser photo.

Another method of biofuel production that shows potential is biochar sequestration, where biomass is burned using a special method called pyrolysis for carbon-neutral heat energy. The remaining ash, “biochar,” can then be incorporated into soil.

Use of carbon credits to offset the impact of indirect land use change is another possible solution.

According to a landmark 2008 study by Princeton professor Tim Searchinger et al. titled Use of U.S. Croplands for Biofuels Increases Greenhouse Gases Through Emissions from Land-Use Change in Science Magazine, previous assessments of biofuels failed to take into account indirect land use impacts of biofuels, which resulted in misleading information. Searchinger argues that from a cradle-to-grave standpoint, increased biofuel crop production will result in more conversion of carbon sequestering ecosystems (such as forests and wetlands) into cropland. Converting carbon-rich ecosystems into cropland releases a great deal of carbon dioxide into the atmosphere, which undermines one of the most important benefits of biofuel use. By taking into account land-use changes, Searchinger argues that biofuels have a net gain, not a reduction, in total carbon dioxide emissions.

Another study published in Science Magazine, titled Land Clearing and the Biofuel Carbon Debt by Fargione et al. in 2008 concluded that this net gain in carbon dioxide emissions from biofuel production, or “carbon debt,” could be reduced if second-generation biofuel sources were used.

However, in a response to the 2008 Searchinger study, Michael Wang at the Argonne National Laboratory argues that Searchinger and his co-authors improperly estimated indirect land use impacts of biofuels. According to Wang, the researchers did not properly take into account increasing annual corn yield per acre, which reduces the need to produce replacement food on other acreage. Wang argues that U.S. biofuel production has resulted in moderate greenhouse gas(GHG) reductions, and that it has not led to indirect land use changes in other countries because U.S. corn exports have remained steady at 2 billion bushels annually.

Searchinger’s response defends his findings from Wang’s criticisms. Searchinger and Wang represent the two sides of the indirect land use issue, and the two men have become so prominent in the field that their back-and-forth arguing has been dubbed the Searchinger-Wang debate.

Estimating indirect land use impacts from biofuels continues to be problematic. It is difficult to assess what causes land-use changes (such as deforestation) in other countries and how much of an impact U.S. biofuel production has on these changes. Why deforestation occurs within a country–whether it is simply natural causes, clearing land for crops or just cutting down trees for lumber–remains difficult to estimate.