The Roundtable on Sustainable Palm Oil (RSPO) and its members announced new commitments to reduce the industry’s environmental impact, but warned that their efforts would only make a dent in global sustainability goals if they had government support. At the industry association’s 13th roundtable conference at the Shangri-La hotel in Kuala Lumpur, RSPO announced that
Read More

Crude oil refers to the primary oil that has not been refined from vegetable oils (the main component is a mixture of triglycerides (commonly known as neutral oil); it also contains non-glycerol substances, collectively referred to as impurities). Due to the simple processing technology, this oil contains many impurities, is easily oxidized and deteriorated, and is
Read More

1. What is hair oil? Unrefined vegetable oils obtained by pressing, leaching or water generation are called hair oils.The main component of the hair oil is a mixture of triglyceride esters (commonly known as neutral oil). In addition to neutral oil, non-glyceride substances (collectively referred to as impurities) are also contained in the wool, and their
Read More 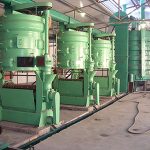